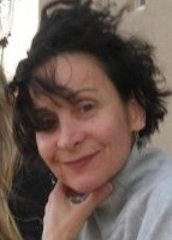 My sisters and I never knew a place other than our small southern New Jersey town of Hammonton that borders the Wharton State Forest, which at 123,000 acres is the largest single tract of land within the New Jersey State Park system. There my two sisters and I grew up surrounded by open space and farms. Plus Hammonton has the distinction of being the “Blueberry Capital of the World” !

The granddaughter of a farmer and the niece of a property developer, I had my feet in two worlds: the Pine Barrens, a vast tract of undeveloped land with its unique ecology and sociology, and the world of business that was forever encroaching on that environment. This is the landscape that informs me as a writer, and is the setting of my upcoming novel, HEADFIRE.

My fiction has been published in London, where I lived for twelve years. I’ve won a short story prize from Glimmer Train Press, and my work has been featured on public radio in San Francisco, where I now live, just north, in the small coastal town of Bolinas.

As Executive Director of the local land trust, I helped develop two affordable housing projects and I continue to consult to nonprofits in the areas of housing, environment and education, most recently for the Prison University Project at San Quentin Prison.

My upcoming novel HEADFIRE is set in the southern New Jersey Pine Barrens.

I knew from the time I was about eight years old that I wanted to be a writer. Growing up where I did, not just in the beautiful strangeness of the NJ Pine Barrens, but on Uncle’s property called The Harbour, my inspiration was nature and silence, what Mom called “quiet.”

When I am writing this is where I want to be, inside a Mario Merz glass igloo. Italy’s Arte Povera movement of the late 1960’s aimed to reconnect man to nature and to argue against a growing corporate mentality. In my imaginary studio there is no clutter or distraction. I am sheltered at the same time as I can view the world.